Rock On: The Stone Design Guide 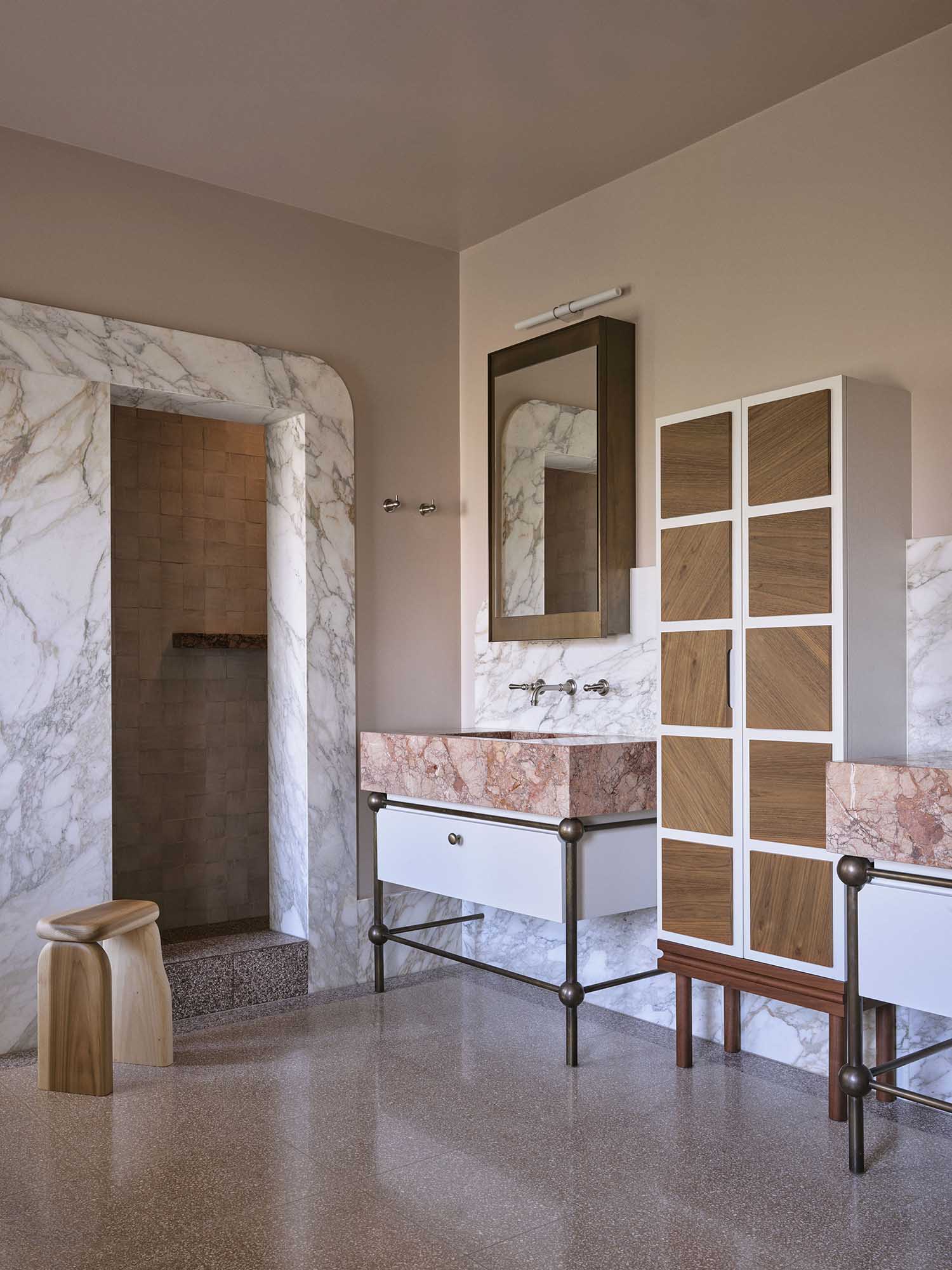 Ready for a geology lesson? Discover the main differences between the leading types of stone on the market, their best uses and which stones are trending right now.

Formed under extreme pressure deep beneath the earth’s surface, granite is considered the gold standard for toughness and durability, making it perfect for worktops. It has excellent resistance to heat and is scratch-proof, so expect it to last a lifetime once it’s installed. Granite is available in lots of different veining patterns, but its best known for the glitter-like sprinkling of mica that give it an unmatched sparkle: colour-choices, however, are somewhat limited, with black, white (and every shade of grey in between) dominating. As well as worktops, it’s also suitable for flooring and outdoor paving, with varying degrees of polished finish, from a glossy high-shine (not always suitable for wet zones such as the bathroom) to matt. It can be used as a building material, too, although the modern-day cost to do this makes it prohibitive.

Not to be confused with quartz (which is man-made, consisting of stone bound with resins), quartzite is fractionally harder than granite, making it an even more durable option. It has a grainy, slightly glassy appearance in its native state, and like marble the variety of colours and patterns available will have you wondering whether this can really be the same material: Macaubas Fantasy features a large-scale pattern of feathery white and grey veining, while Amazonite (sourced in Brazil) is a heavenly turquoise with grey, white and gold. Use it principally for worktops (inside or out), although in industry it’s also used crushed-up for rail ballast, and is also an important source of silicon.

If you love a moody matt-black finish, then you’ll probably be attracted to basalt as a surface material. Basalt is made from igneous (volcanic) rock, and it is hard but porous, so it’s great for, say, floor tiles in a high-traffic area, but less useful as a worktop material because of the way that stains will quickly soak in – sealing is recommended. Use it with a split-faced finish on a wall to create textural interest, or as honed paving slabs for an outdoor space: it’s occasionally used for other elements too (check out Danish brand Made a Mano for its sculptural lava-stone basins). The colour range runs from grey to black, and even dark blue.

Creamy limestone is classically beautiful, and has been used for the building blocks of many of the world’s wonders, from The Great Sphinx to the Empire State Building. It’s a sedimentary rock, formed on the earth’s surface from compressed ocean sediments – which is why certain limestones can be charmingly full of fossils. It’s still used as a building material, and internally it is most often used as flooring, staircases or wall cladding, and for architectural details such as mantel pieces. It’s not just for traditional spaces, either: travertine (known for its pock-marked appearance, created by hot mineral springs as the stone is formed) was beloved of mid-20th-century modernist architects, and is still incredibly popular for creating a look of understated luxury in contemporary interiors.

A fine-grained metamorphic rock, slate’s ability to be split to create uniform sheets as well as its incredible durability has historically made it one of the most popular materials for roof tiles. Don’t just use it on the roof, though: it also has plenty of other applications and deserves to be admired for its sultry dark blue-grey hue. It works as a worktop, although it needs periodic sealing, and, being highly brittle, it won’t resist a hard impact such as a heavy pan being dropped on it. Wall and floor tiles are also popular applications: a riven finish hasn’t been tampered with in the manufacturing process, so you can still see a layered effect on the surface (perfect for a more rustic look), while a honed finish is completely smooth, perhaps more suitable for crisp-lined contemporary interiors.

This is the only material on this list that qualifies as a semi-precious stone, and its opulence can make an incredible impact. Its unique quality among all the stones listed here is its translucency, a property that sees it often combined with a natural or electric light source to create a glowing showstopper – think bar-fronts, back-lit wall panels and even internally lit furniture. Some onyx slabs are monochromatic, with a cloudy or cracked-ice appearance in off white or soft pink, while others are more dramatically patterned in green, gold and brown. As today’s interior designers revisit the 1970s for inspiration, so onyx has seen a revival in popularity: fashion boutique Forte Forte in Rome recently showed how to treat it in a contemporary way, wrapping walls and floors in book-matched green stone and combining it with simple brass panels and doors.

Marble may seem hard enough, but in geology it’s known as a ‘soft’ rock – which is why it was deemed so suitable for carving all those Ancient Greek and Roman statues. Its (relative) softness and porosity make it averagely suitable for worktops, but it has beauty on its side, which means that designers and homeowners are often able to overlook the fact that acidic liquids can bite into it, or stain the surface. White and grey Carrara or Calacatta marbles will forever be classics, but designers are looking to more unusual colours now to create a point of difference in their work, from swirling green and purple to fractured dark grey.What else can you use marble for? Take your pick: walls and floors; carved into sculptural furniture, baths and basins; used to create a glowing light-shade; or made into a statement fire-surround. The choice is almost limitless.

One of the softest stones – it’s been used for carving for thousands of years – soapstone is also one of the lesser-known worktop materials (lifestyle guru Martha Stewart is a fan). Available in colours from white to dark grey, it’s prized for its patina that develops over time as the surface oxidises, but there are plenty of other advantages, including incredible resistance to heat and acids thanks to its density (it’s often used as a material for laboratory worktop for this reason). It's relatively easy to install because its softness makes it easy to saw and shape, but that softness can be a downside, of course, so direct cutting should be avoided. Soapstone has another interesting quality, which is that it is excellent at storing and evenly radiating heat. It’s a traditional material used for kitchen sinks (keeping the water hot in the days before hot water on demand) and you’ll still find it used as cladding for stoves.

The Renovation Mistakes Every Designer Should Avoid

Thank you!
Oops! Something went wrong