The World’s Most Beautiful Co-Working Spaces

We've searched around the globe to bring you the chicest designed co-working spaces. Making the everyday mundane week that much better.
Inspo 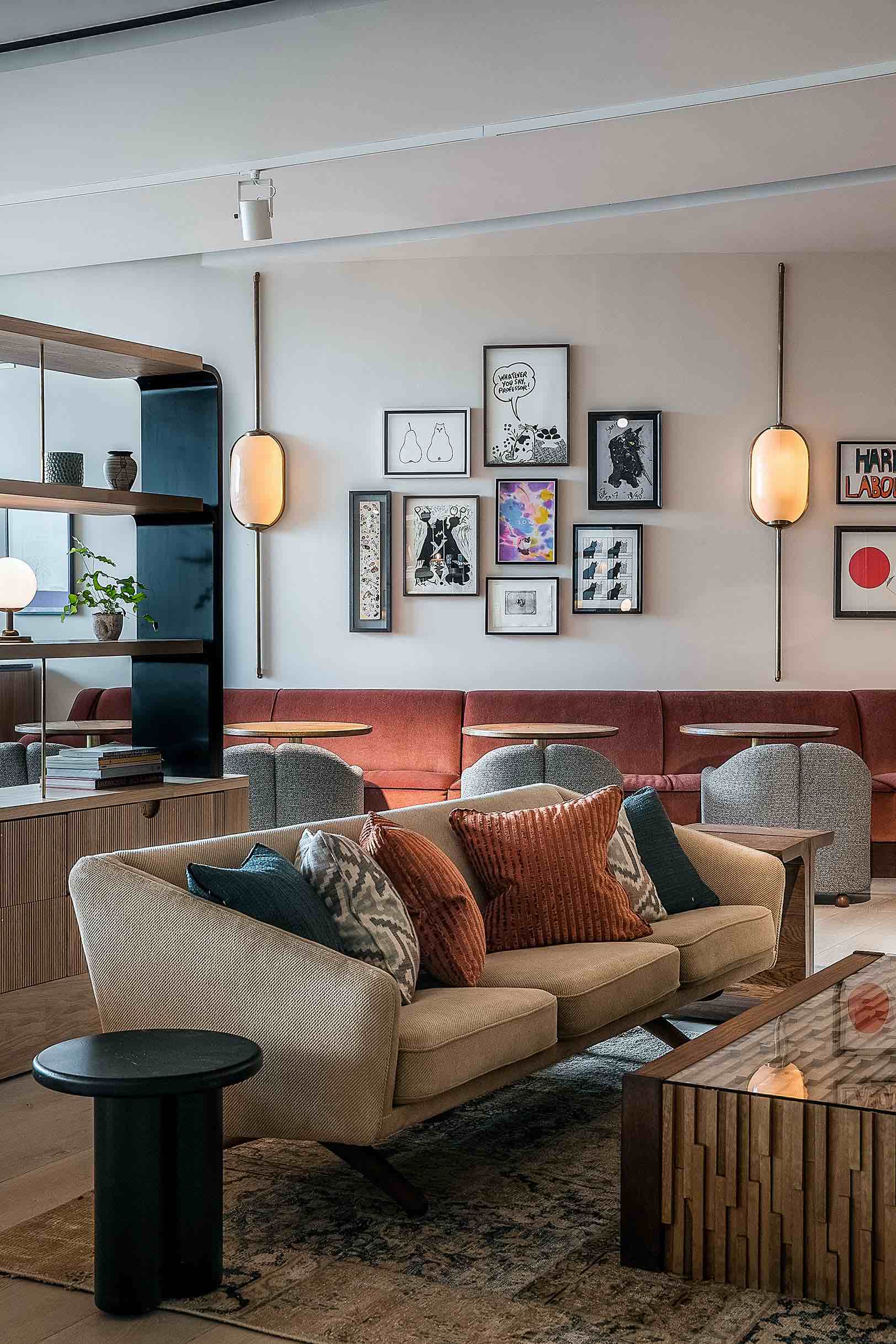 Working patterns have been thrown up in the air over the past two years, and we’re just starting to see where the pieces have fallen. With a more nomadic, flexible approach seemingly set to stay, co-working spaces are increasingly looking like the answer to many people’s work-life balance, Many businesses are looking to great design as a differentiator – a way to pull in new clients and keep them happy – so Portaire has scoured the globe to find the spaces that have best responded to workers’ needs, both creative and practical.

This imposing classical building takes up a whole block in central London’s Holborn, and inside, the interiors are just as grand, with a soaring travertine-clad lobby setting the scene. Architect Hutchinson & Partners has remodelled the building, updating an earlier rethink by Will Allsop that included, among other things, amorphous meeting pods hanging from the ceiling. The pods have stayed but now there’s a sophistication and a material warmth to the scheme: bronze and stone complement the travertine, curving timber partitions separate out smaller meeting booths, and marble and timber kitchens add a touch of domesticity. As well as workspace, Victoria House has a ‘wellness suite’, space for larger meetings and events, and a café in the lobby.

Opened in November 2021, The Malin taps into the hospitality design experience of interiors studio Fettle, and is clearly taking its cues from the more service-focused hotel industry: a concierge-like executive assistant can run errands in the area and there’s even a small retail space, just like the best boutique hotels. The interiors co-opt the cream of US design, both mid-20th-century and contemporary, from Eames chairs to lighting from Roll & Hill and wallpaper from Calico, with monthly changing artwork courtesy of e-commerce site Platform. Richly coloured upholstery – dark green, blue and mustard – sings out against the white walls and steel columns, while the timber desks, doors and windows add warmth.

Architect Henri Cleinge had some pretty impressive raw material to play with when he took on this project to create a café and co-working space from the former Royal Bank building in Old Montreal, builtin 1926. The ground floor main banking hall has 15m-high ceilings and 1,100 square metres of space, framed by enormous arched windows and topped by an ornate plaster ceiling. The row of original bank teller stands acts as a barrier between the central café and the conference rooms behind it, while freestanding brass-plated minimalist enclosures host space for quieter working: the brass picks up on the existing lighting fixtures and detailing of the teller windows.

Neue House has locations in Los Angeles and New York (with Miami coming soon), but none so grand as LA’s Bradbury Building, an ornate architectural masterpiece originally built in 1893. The co-working space takes up the entire second floor and is the work of interior design studio Design Agency, which completed the project in early 2020. The studio opted for simple, modern calming spaces that complement rather than compete with the building’s ornate atrium with its marble staircases, elegant iron work balustrades and huge roof light. A pastel palette, parquet floors and softly draping neutral linens at the windows lend a bright and breezy feel. The Wyman Bar, named after the building’s original architect, is where members go to relax after a day at the coalface, and features a marble-topped bar, ruby-red bar stools and soft globe lighting by Lee Broom.

The Office Group (TOG) is no young upstart, having blazed a trail for design-led co-working spaces in London since its founding in 2004. For Douglas House, which opened in early 2021, it once again called on the talents of Sweden’s Note Design Studio, which was charged with turning an uninspiring office building in the West End into something with a bit more personality. Note describes the effect as a “gentle punch”: a huge desk clad in blue Alpi veneer (created by Ettore Sottsass in the 1980s and forever synonymous with playful postmodernism) greets visitors, while an undulating wall of glass blocks runs the length of the ground floor, concealing a bank of meeting rooms. Feeling burnt out? Visit the Recharge Room, a womb-like relaxation space with a halo light installation on the wall, or the OxygenRoom, full of greenery and daylight.

Another project by The Office Group, this space shows how the parent company creates a sense of place that responds to the architecture and the wider neighbourhood. Liberty House is on Regent Street, adjacent to the revered Liberty department store (it was originally used as stock rooms, and to house the store’s workers) and aims to reflect the creativity and craftsmanship of one of London’s best-loved retail experiences. Designers SODA Studio took some elements of the palette from Liberty’s famous textile designs, working with artist Adriana Jaros to create the colour scheme, and the spaces are full of soft, sculptural furniture from the likes of Gubiand Sovet. The interiors also have a strong sustainability focus, with flooring made from timber offcuts and surfaces made from Altrock, which resembles large-scale terrazzo and incorporates marble offcuts.

Located between the Place de l’Opéra and the Bourse, this is The Bureau’s third location in Paris. Lauded French architect Franklin Azzi devised the interiors, looking not to the building’s 19th-century roots but mid-20th-century America and the work of Frank LloydWright, with swish oak panelling and built-in joinery, as well as the 1970s, resulting in mirrored strips on one wall and a sunken conversation pit. Cult lifestyle blog The Socialite Family sourced the furniture, lighting and accessories (as it has for all of The Bureau’s locations), including an imposing Murano glass chandelier hanging above the meeting-room table, a vintage Osvaldo Borsani piece. A leafy outdoor patio provides a secluded space to unwind and there’ salso an on-site restaurant and gym.

Laptops are frowned upon at Soho House, so in 2015 the private members’ club group bowed to inevitable demand and moved into the co-working industry, giving its loyal members somewhere to work as well as play. Soho Works now has eight locations in the UK and US, all based within or close to its houses and featuring the same colourful, comfortable and eclectic styling, designed by the in-house team. The White City outpost in West London is based in Television Centre, former base of the BBC, and unsurprisingly has more of the feel of a gorgeous hotel lounge, mixing vintage, modern and bespoke pieces, while glazed partitions and large timber shelving units breakup large space into cosy corners.

Thank you!
Oops! Something went wrong